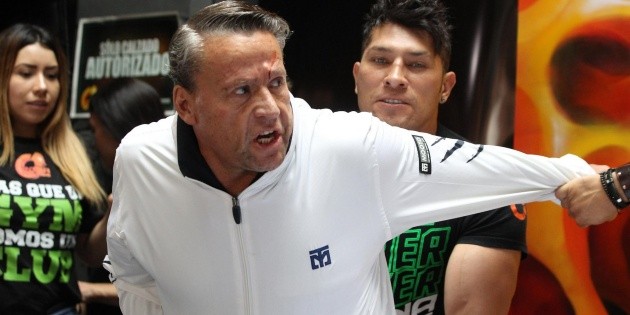 Driver Alfredo Adame agreed to fight Carlos Trejo after he called him a coward by starring in a confrontation in the street.

There is already a stipulated date For this event, which will be a formal event with all the corresponding legal actions, there was even a virtual handshake to consolidate this promise.

Alberto del Río, a professional wrestler, was the one who assured that everything is ready for this fight when he joined the “SNSERIO” program, in which Adame was being interviewed.

According to the fighter, only Adame’s public commitment was missing to make it possible.

“I don’t know Alfredo Adame, only I’m leaving because of what people are talking about, but I have to make sure this fight happensdel Rio said.

Carlos Trejo previously mentioned that Alfredo Adame is afraid of him and that he has been eluding him for 17 years, but finally the appointment to face each other has been consolidated and to know if this will end their rivalry.

Adame received a proposal for this event a long time ago, he even agreed to remove the restraining order against Trejo; However, time passed and he was not sure that the dispute would actually take place or would only remain as one proposal among many.

According to the driver, he was able to contact the promoter of the event and finally on the program he was officially invited to participate in this fight organized by del Río.

“I know you are a trained fighter and I have a friend who was present at the street brawl you were involved in a few days ago. This is not a mockery of mixed martial arts or boxing, this fight will be sanctioned.” Let’s get it going” declared the professional wrestler.

There will be more fighters participating in this event, however, Those who have caused the most impact on social networks have been Alfredo Adame and Carlos Trejo.

Some of the profits generated at the box office to attend the event will be donated to various foundations with which del Río has previously participated in Nuevo León.

When will Alfredo Adame fight against Carlos Trejo?

The fight will take place in Monterrey on February 17.

We use cookies to ensure that we give you the best experience on our website. If you continue to use this site we will assume that you are happy with it.Ok