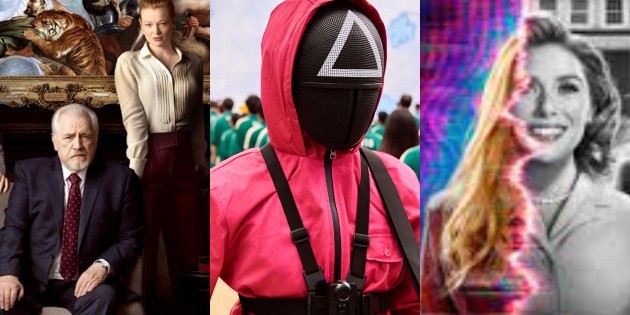 The best series released in 2021 on Netflix, Disney + and HBO Max

“The Squid Game“It was the surprise and great success of the year in the world of series in 2021 that closed” La casa de papel “in a big way, but if these two Netflix productions were the most popular, quality came hand in hand from “Succession” (HBO Max) o “Wandavision” (Disney+).

It is impossible to establish a ranking by points with the avalanche of premieres this year, so this list also values ​​its originality and its opportunity to debut. Here are the best series released in 2021:

Violent, raw, dramatic, bloody and wildly addictive, the “Squid Game” series premiered in September without advertising; Netflix did not even suspect that that survival game in which 456 participants would put out their eyes (sometimes literally) to win a contest would become the most viewed proposal in its history, with 142 million viewers in its first 28 days of broadcast .

Special since its inception, because its creator, the unknown in the West Hwang Dong-hyuk, wanted to capture the economic struggles and inequalities of his country, the first surprise was that the series swept through the smallest, generating panic among many parents, as time that a wave of tweets excluded you if you were not a follower.

Divided into two parts, the last season of “La casa de papel” (“Money Heist” in English) has put an end to the most followed robbery in the history of television in Spain and a great international success (according to data from Netflix, the series has accumulated 1,832 million hours seen counting the first 28 days of broadcast of its five seasons).

With a first part of five chapters of pure warfare, and another five episodes dedicated to nostalgia and farewell, the series created by Álex Pina has said goodbye in style, becoming the second most watched in Netflix history. Tokyo, Nairobi, Rio, The Professor and company have said goodbye – with an ending that has satisfied fans, as it has not aroused great criticism – to the series that changed Spanish fiction.

Created by Chris Van Dusen based on Julia Quinn’s best-selling novels, this period series, set in the competitive world of London high society where young women sought husbands at their court appearance parties, “Bridgerton” spawned a legion of followers, who are already waiting for the second season.

The choice of its protagonists – the attractive Phoebe Dynevor (Daphne Bridgerton) and Regé-Jean Page (Simon Basset) -, has undoubtedly been decisive in the massive follow-up of the series (the most viewed on the platform until “Squid Game “), but also her incredible wardrobe and romantic stories.

The seven-episode series, released in April 2021, portrays the life of a small Pennsylvania town through the investigations that a local detective – impressive Kate Winslet – is carrying out in her environment to clarify the death of a girl; in between, she must also fight for custody of her grandson.

Elizabeth Olsen and Paul Bettany reprise their roles as Wanda Maximoff and Vision, played in other Marvel films, this time with a tribute to American sitcoms from the 50s and 60s, with the inclusion of these two superpowered beings in the typical Idyllic life on the outskirts of a city, until one day they begin to suspect that not everything is what it seems.

Although series addicts were already behind the outcome of this magnificent series created by Jesse Armstrong and released in 2018, no one suspected the dimensions that its third season would reach, especially if the subject matter of “Succession” does not affect 99.9 % of the world population: the lives of the richest people on the planet.

Perhaps that’s why its success: With characters at the height of Shakespearean tragedies, brilliantly played by Brian Cox (the patriarch Logan Roy) and his children Roman (Kieran Culkin), Siobhan (Sara Snook), Kendall (Jeremy Strong) and Connor (Alan Ruck) – the series turns on its axis in the most unexpected, disaffected and treacherous maneuvers: the goal, change and change so that everything remains the same.

The anticipation for the series that anticipated the Star Wars universe created by George Lucas lasted throughout 2021 with the adventures of Din Djarin, the Mandalorian played by Pedro Pascal (although his face is not seen until the end), a lone gunman beyond the reaches of the Republic whose mission is to protect one of the most delightful characters on Disney +, Baby Yoda, Grogu.

Without being strictly a musical, “Zoey’s extraordinary playlist” incorporates in all its episodes essential musical numbers to follow the plot, since the protagonist, Zoey Clarke (Jane Levy) unintentionally listens to the most intimate desires of the people around her through songs that they sing to him, a situation known only to his neighbor Mo (Alex Newell).

Alejandro Amenábar’s first series was presented on the Spanish platform in style, with an impressive technical invoice to navigate through the history of the “Odyssey Case” and the recovery of the treasure from the Nuestra Señora de las Mercedes frigate. Its success has brought it to German television and in January it will premiere in Latin America, the United Kingdom and the United States, on AMC.

Starring Álvaro Mel, Ana Polvorosa, Stanley Tucci and Clarke Peters, the series is an adaptation of the comic “El tesoro del Cisne Negro” by Paco Roca and Guillermo Corral. It is a pure adventure story that tells how the young diplomat Álex Ventura (Mel), unwittingly becomes the leader of the mission to recover the underwater treasure stolen by an American adventurer (Tucci).

Created (together with Claudia Costafreda) and starring Ana Rujas, “Cardo” became, from the Atresmedia Player platform, one of the surprises of the year, so much so that Variety magazine (the movie Bible) has placed it in third position of its top of international series of 2021.

An honest and unsweetened generational portrait, centered on Maria, in her late thirties, working at a flower shop and obsessed with having fun in a kind of aimless forward flight. Sex, drugs or alcohol spice up a series very different from any other Spanish series with youth as the protagonist.