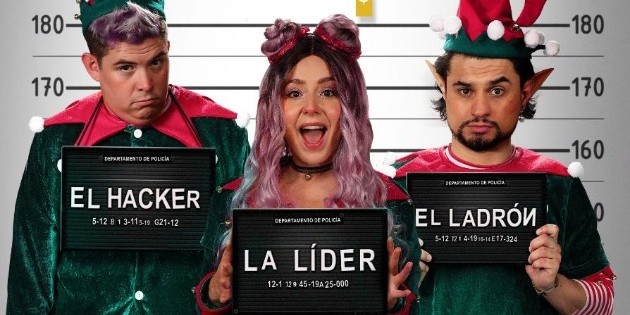 Christmas 2021: The Christmas Movies You Can See On HBO Max

The streaming platform HBO Max chose 12 titles from his catalog, made for you, and that you will surely see as a family:

This is the new Max Original produced in Mexico, directed by Alonso Iñiguez and starring Diana Bovio, Ricardo Polanco, Paco Rueda and Hernán Mendoza. In this story, a trio of criminals plan the robbery of the year, posing as elves in a Christmas show in one of the most exclusive shopping centers in the city where they will collect private information from some wealthy families, then rob their homes while they enjoy from their December vacation, will they achieve their evil mission?

Meet the restless ten-year-old “Jack Doyle,” who is willing to go the extra mile to get the Christmas present he most wants: a Nintendo video game console. With this comedy narrated by the adult “Jack Doyle”, travel back to the eighties and remember the wonderful Christmases of your childhood. Starring Winslow Fegley and Neil Patrick Harris, it’s a simply must-see movie this season.

This film tells the story of “Emma”, a 29-year-old girl, who returns home to take care of her father, “Jack”, after some sad news. Upon arrival, he is shocked to discover that Jack has wasted no time in starting a relationship with “Emma’s” old best friend, “Brandy.” This fact makes the purpose of the protagonist turn 360 °, who She is now committed to ending that relationship.

This French film was nominated for the Oscars, the Golden Globe and the Bafta award for Best Foreign Film. Based on a real event that occurred during World War I, known as the Christmas Truce, in which German, French and British soldiers decided to forget their differences and spend Christmas Eve together. Through this film, director Christian Carion sends a message of peace in difficult times that will touch your heart.

Comedian Natasha Rothwell narrates this HBO Max original reality show where three singles look for that special someone to take home for the holidays. Dating, Christmas sweaters, kissing under mistletoes and drama take over this series. Will they get to know that person? do not miss this funny Max Original that will catch you from the first chapter.

From an amazing iPod as a trade-in gift, a dangerous Secret Santa, an epic snowball battle, to a “Dwight” -style Christmas is lived out at “The Office.” Enjoy the special chapters of this series that has HBO Max and why not ?, incidentally, have a fun marathon of this unique classic with “Michael Scott”, “Jim Halpert”, “Pam Beesley” and “Dwight Schrute” , among many other characters that will steal your heart and countless laughs.

THE BIG BANG THEORY, chapter The simulation of Santa.

In this memorable episode, “Sheldon” recalls, without much enthusiasm, his childhood Christmases during an epic game of Dungeons and Dragons in the company of “Leonard”, “Howard” and “Stuart”. Meanwhile, “Penny”, “Bernadette” and “Amy” try to find the perfect girl for “Raj”. It goes without saying how much fun the entire series is, ideal to enjoy with the whole family.

Is there a better way to close 2021 than with a classic comedy series? On HBO Max you can exclusively see the best celebrations of the best known group of friends on television: “Rachel”, “Monica”, “Phoebe”, “Chandler”, “Joey” and “Ross”. Relive your favorite chapters, from the “Mona and Ross” Christmas card, a “Christmas in Tulsa”, “Phoebe” search to find her father, the neighborhood dispute caused by “Monica” sweets, the fun encounter Between “Santa Claus”, an armadillo and “Superman” to the classic dance routine of the “Geller” brothers, this series has tons of fun moments that will help you end the year with a good laugh.

In the episode “Merry Christmas Mordecai”, one of the elves working in Santa’s workshop designs a very dangerous gift that puts all of humanity at risk. After some events, this gift ends up in the hands of “Mordecai” and “Rigby”, who now have to destroy the gift and save Christmas, but not before facing a series of fun obstacles. Close the year with an incredible adventure with your favorite characters.

In the chapter “Christmas Parties” enjoy the exciting adventures of your three favorite bears. In this episode, Polar, Pardo and Panda will learn how important the company of friends is during the Christmas holidays when they have to divide their time to celebrate with each of them and also, manage to attend a great Christmas party. enough to complete all your plans?

Can you imagine not being able to celebrate Christmas for fear of a terrifying snowman? This is what the best gang of detectives on television faces. “Scooby-Doo”, “Shaggy”, “Vilma”, “Daphne” and “Fred” will have to unmask a giant snowman that attacks the houses of a small town. Without a doubt, this will be an original way to spend Christmas Eve.

BATMAN: THE ANIMATED SERIES, Christmas chapter with the Joker.

As 2022 begins and the countdown to the premiere of the long-awaited movie ‘The Batman’, relive the most epic battles of your favorite DC Comics character in this special chapter of the renowned animated series, where the “Joker” puts on A malevolent scheme is underway as he kidnaps three notable citizens of “Gotham” and challenges “Batman” to find them before midnight. You are not going to want to miss this battle for the world (take it as preparation for the arrival of the new Batman).