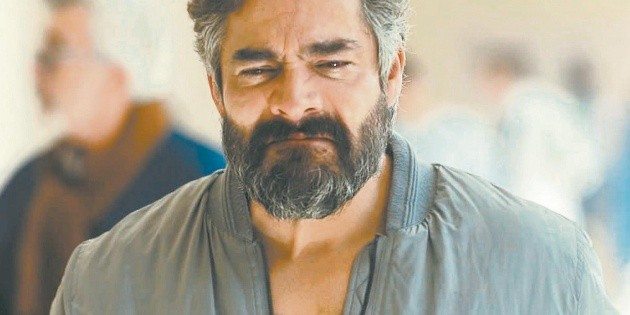 Gaining 14 kilos and getting into a suitcase for a few minutes and where he almost fainted because of how small it was were the demands for Omar Chaparro in what was his first dramatic film, “The wingwalker”, whose filming has just concluded.

“I had to put myself in the shoes of a desperate father because he has his daughter between life and death, powerless because he cannot cross to a country where they have to operate on his daughter.”

In a sequence, The actor recounts in an interview, he required his entry into a travel suitcase, as it was one of the options sought by the character to be able to go from Mexico to the United States.

That time, says Chaparro, he suggested that he trick himself when he saw that it did not fit, but the director said that the public would realize it.

“I didn’t want to disappoint and I said, ‘ok, sit three on top of me and try to close it. It was achieved and I ended up with bruises on my back, it was exasperating, but at the same time gratifying because I was living it, I was not acting ‘”.

“The wingwalker” is the debut of Alonso Álvarez-Barreda, who encouraged Chaparro to be in a role far from the comedy seen in “No manches Frida”, “Tod @ s fall” and “Valentina’s wedding”.

Omar agreed to play a deported man, who must seek to return to the United States against the clock because his daughter, a US citizen, will have to undergo heart surgery.

“When he arrived gaining weight and with the mess, we began to shape his physique,” says Álvarez-Barreda, the director.

“In the early days I saw his gestures, I began to tell him to use references being ‘Dream of escape’, by Tim Robbins (1994), one of them, we talked about studying Will Smith in ‘Happiness’ and soon he began to change his gestures, the voice and, every time he relaxed, I told him, and he asked for a few minutes and returned to what he was doing ”, he adds.

Almost all of Tijuana, from the home of the actual deportees, through the fence that separates the two countries, Rosarito beach and the set where “Titanic” was filmed to shoot water scenes, were the locations of the film.

The cast includes, among others, Will Rothhaar, Jesús Ochoa, Mercedes Hernández and Gustavo Sánchez Parra.

Omar’s passage through the cinema