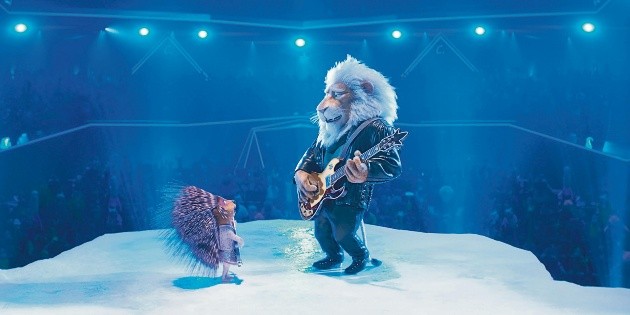 Giving life to the feline rockstar “Clay Calloway”, in the new installment of “Sing 2”, not only represents for the Puerto Rican singer and actor Chayanne exploring the cinema from another facet, as this character means the opportunity to resume his musical plans after almost two years of absence from the recording studios due to the COVID-19 pandemic.

“Sing 2 “premieres today December 22, and in an exclusive interview with EL INFORMADOR, Chayanne recounts the odyssey he experienced to enter the fur of “Clay Calloway”, which is key in the new plot headed again by the passionate music producer “Buster Moon”, who in his attempt to offer the best musical in history gets into all kinds of muddles.

“We really enjoyed the first movie, I saw it without knowing what would be part of the project in the second part, in ‘Sing 2’. They told me that – “Clay” – was a lion, a new character and I really liked the idea, we were talking about the character, who he was, what had happened to him, why he made the decision to isolate himself, what the other characters were like ” , Chayanne comments on how it was to discover the motivations that led “Clay” to distance himself from the stage after achieving success.

Chayanne, who in addition to being a pop reference in the Spanish-speaking industry with hits such as “Lo deja todo” and “Salomé”, remembers that his approach to the cinematographic field is not new after having starred in films such as “Baila with me” in the 90s and voicing the bandit “Flynn” in the animated film “Tangled” in 2010. Ajora highlights the level of detail that the producer Illumination developed so that the koala “Buster Moon”And his musical group have a unique aesthetic.

“In the first film -it was about- a kind of show, in the second they wanted to reach another level and how to work as a team, plus the beauty of the music on the soundtrack. All these characters seem to be alive, because of how they work today with all the technology and all the advances, it seems to be true ”, indicates Chayanne, highlighting the level of talent that he shares with the cast also led by Benny Ibarra, Vadhir Derbez , Hanna Nicole, Ashley Grace and Roger González, among others.

“It has been a very beautiful project that fills me with joy in the middle of a pandemic, to be focused looking at the screen and the lion, joining a very serious voice. It was studying the character, see why his pain, why his isolation, why that angry voice from that past. ‘Clay’ is a rockstar, he has had many years of career and his voice is changing ”.
A unique connection

As “Clay Calloway” is an experienced musician, but with a sad past that does not allow him to enjoy his great love for the stage, Chayanne does not hesitate to emphasize that this was essential to connect intimately with the person and provide him with a voice capable of navigating for different feelings from nostalgia, loneliness and pain, but also to bring him to a state of joy and fulfillment in his attempt to recover the lost years.

“I had an idea of ​​that voice and all the professionals in this project nurture youWorking as a team, which is part of the messages of the film, this is how the project was achieved. It was very funny, because the movie has many codes, it is for the whole family, because it is not only for children. The messages they send you are wonderful, they make you laugh, you get a tear, you get emotional ”.

Beyond the confrontations and challenges that the feline “Clay Calloway” has to regain his voice and love of music, Chayanne emphasizes one of the deepest moments of “Sing 2” in which he had the opportunity to immerse himself again in the stage.

“It was really sharing it with ‘Calloway’, because when you are on stage and you sing a song and people sing it with you, that is very big, when people start to move, it is a connection, it is an energy that is united. There are moments in the movie when you see that and I was thinking about the stage. “

Although nostalgia invades Chayanne at times about what it would mean to return to the stage and meet face to face with his audience, the singer recalls that his absence due to the pandemic has also been a process to further value his career and the special complicity and the only one you have with your audience.

“Just that I had to stop in the middle of a tour leaving Mexico for Argentina. I have always appreciated my career, everything I do, the love and respect I have for the public, but stopping something so drastically, not because of one, but because the world stopped, no matter what profession you have, it was like a stop to reflect about what you want to do, how are you, to think: get passionate or look for things that really make you happy and put your energy there. This beginning is very important, in a way I am starting again with this wonderful project, with the songs that I am recording now, and then little by little I go back to where life takes me ”.

Although the musical novelties will arrive for Chayanne in 2022, The singer reveals what his dream duet would be like if he could share the stage with the feline rockstar “Clay Calloway”: “I think we could work ‘Provocame’, because it is a pop-rock within my pop, you know that I am from Puerto Rico and I make fusions, within the line of pop I can make more tropical fusions, more rock, soft-rock, then I would tell him that song ”.