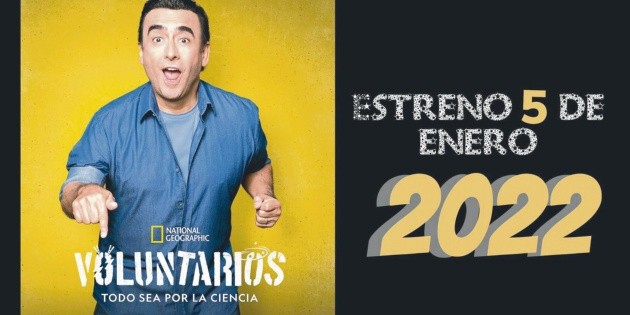 Adal Ramones premieres “Volunteers: Everything is for science”

“Volunteers: everything is for science”, the new series from National Geographic Original Productions, will arrive at Disney + on January 5, 2022 with the first 4 episodes.

Hosted by Adal Ramones, and performed by Non Stop, The new production developed entirely in Latin America seeks to answer some of the most common questions of everyday life through fun experiments with volunteers.

In “Volunteers: everything is for science”, Adal Ramones guides the audience in a scientific adventure that takes as a starting point some common (and not so common) questions that curious minds have about how things work, to examine the scientific theories behind them and check them in the most fun way: testing them on your own body.

For this, it has the participation of an audacious team of volunteers made up of Armando Álvarez, Camilo Pugliato, Micaela Lapegüe, Esteban Mascó and Angietta Rodriguez who, in the name of science and with humor as a tool, submit themselves in the first person to the experimentation and subsequent analysis of the evidence.

Volunteers don’t rest for enlightening answers: Why are some sounds more annoying than others?

How cold can humans take? Why does it hurt so much to pull a hair out of your nose?

With elements of a reality show, and a unique combination of science, adventure, and humor that appeals to audiences over 14, the new series stimulates curiosity, encourages exploration, and sparks an interest in science from a fun, everyday perspective.

The series, which is composed of 2 parts of 4 episodes of 20 minutes each, premieres the first part on January 5 of next year. As of January 19, the experiments in short format will be available on Disney + so that the audience can consume them as they like.

Directed by Pablo Romero, Voluntarios: everything is for science was recorded in Buenos Aires, Argentina in a laboratory entirely built for the series.