Actor Park Eun-seok (38), who appeared in the SBS drama ‘Penthouse’, won the case against casting director A, who claimed compensation for spreading false information about himself.

According to the legal community, on the 9th, the Seoul Northern District Court said, “It is difficult to believe that the content of the article written by Park Eun-seok about Mr. A is false, and it is not for the purpose of slander, but rather to urge attention to avoid harm to other theater actors based on the facts he experienced. It cannot be considered illegal because it was written for the sake of the plaintiff.”

In about 2017, Park Eun-seok met Mr. A, who introduced himself as the casting director, and was handed a business card, but afterward, he was suspicious of his actions and entered a group room with many theater actors, saying, “Mr. A claims to be the casting director, It is known that he wrote something that read, “Please be careful about exercising so-called power.”

Regarding this, the court said, “According to the data submitted by the plaintiff, it seems that he has been working as a casting director since around 2006, but it was true that his affiliation was not clear because the name and mission on the business card were different from the real one. There are facts about going to a concert or having a meal with an actress, so it is difficult to believe that this article is false.”

“The main purpose of[Park Eun-seok’s writing]is not to slander, but rather to urge attention to not cause additional damage to other theater actors based on the facts Park Eun-seok actually experienced, and it is illegal for the public interest. I can’t see that,” he added. 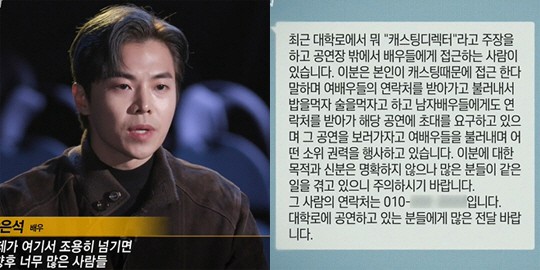 Previously, Mr. A claimed that he had been working as a casting director since 2006, and filed a lawsuit in December last year, saying, “Park Eun-seok is the first to write a slanderous article about me, and I am suffering economic and psychological damage because of the loss of work.”

On the other hand, Park Eun-seok appeared in SBS ‘I Want to Know’, which was aired last March, where the casting director A was having a legal dispute with a model, actor, and netizens. I think I can.” He said in an interview about the case himself.