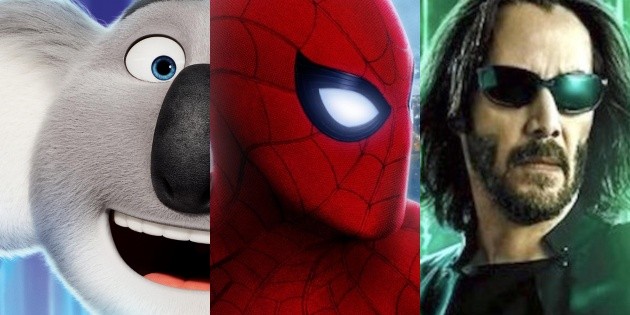 Movie premieres: From Spider-Man to West Side Story and Sing 2, the new thing for Christmas that you should not miss

The premiere of “Spider-Man: No Way Home” this week is the first and most anticipated of the titles that will hit theaters for Christmas, a good time to regain the habit of going to the movies with a very varied offer: the new “West Side Story” (“Love without barriers”), the animation of “Sing 2“or the new from Paul Thomas Anderson.

Here we will give you some details about the movie premieres that arrive in December 2021:

With many surprises that will delight fans, the latest installment of “Spider-Man” takes up what happened in “Spider-Man: Far from Home” just a week later and with a “Spider-Man” (Tom Holland) turned into a villain in the eyes of the public.

Many characters from other Marvel movies, with a special role in the charismatic “Dr Strange” (Benedict Cumberbatch) and a story very aimed at teenagers with the multiverse with the backdrop.

Remember to stay until the end of the movie because there are two post-credits scenes.


It is the fourth installment of “The Matrix”, with a “Neo” (Keanu Reeves) who remembers nothing of his cybernetic and existential adventures with one foot in “The Matrix” and the other in reality.


The best way to celebrate 50 years of one of the classics of world cinema, “West Side Story” is to rewatch the history but passed through the eyes of Steven Spielberg, who has fulfilled a long cherished dream with this “remake”. His most important decision has been to have a completely Latino cast and not to subtitle the parts of the dialogue that take place in Spanish.

At the moment, four nominations for the Golden Globes endorse it.Do not miss it!


After the fantastic first part, comes a new installment of these funny and tender artists, who make up a great band of music lovers. Although it seemed difficult, “Sing 2” surpasses “Sing” in spectacularity, technique and musical themes with the incorporation in the soundtrack of Bono or Halsey.


Nicole Kidman and Javier Bardem get into the skin of two mythical characters in the history of American television, Lucille Ball and Desi Arnaz, in “Being the Ricardos”, an Amazon Pime Video bet with a script and direction by the great Aaron Sorkin, which focuses on a week of both personal and professional crisis for the couple. The two leads have been nominated for the Golden Globes.

Also on Amazon Prime Video, George Clooney’s new film as director five years after “Suburbicon.” On this occasion, he takes to the cinema the memoirs of the writer JRMoehringer, with Ben Affleck, Tye Sheridan and Lily Rabe in a film that has received mixed reviews.

Prequel to the two funny installments of “The Kingsman”, parodies of spy movies with brilliant Colin Firth and Taron Egerton at the head of the cast. Now the British director Matthew Vaughn moves to the beginning of the 20th century to tell the origins of that surreal spy organization and has a great cast: Ralph Fiennes, Gemma Arterton, Rhys Ifans, Matthew Goode or Djimon Hounson.

Paul Thomas Anderson is a director revered by much of the critics and who has directed superb films, such as “Magnolia”, “There will be Blood” or “Phantom Thread”. Now his register changes a lot, although without forgetting his precious style in “Licorice Pizza”, set in California in the 70s and with the love story of two young men as the common thread of a very nostalgic fresco.

Joel Coen has gotten into his first solo project, without his brother Ethan, and he has done so with none other than one of the great texts of world literature, William Shakespeare’s Macbeth. Of course, he has relied on interpreters of the level of Denzel Washington or Frances McDormand (his wife) such as Lady Macbeth. A tape that has been seen in movie theaters in some countries and that in Spain will be seen directly on Apple TV.

And for after Christmas, you have to prepare for other great premieres, What “Nightmare Alley“, by Guillermo del Toro, the new”Hotel Transylvania” or the “Morbius“from the universe of”Spider-Man“With Jared Leto as Marvel’s antihero.