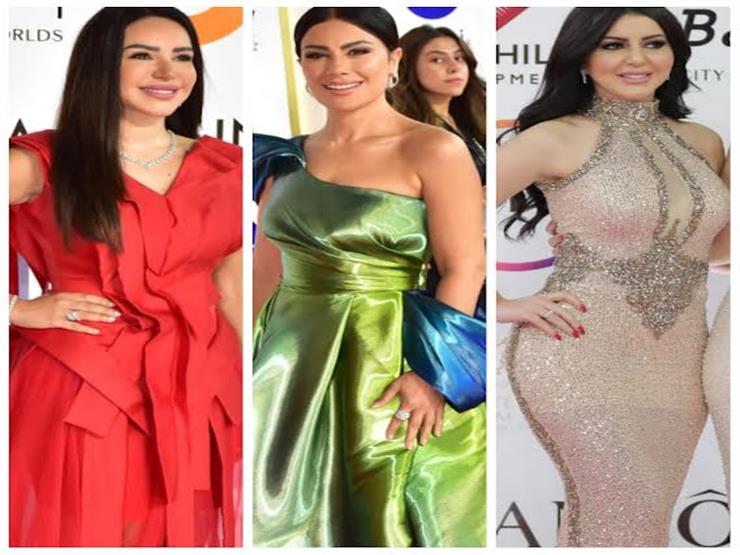 Bold and charming.. the most prominent views of Red Carpet, the end of Cairo Film Festival

Many stars shone on the red carpet while attending the closing ceremony of the 43rd Cairo Film Festival.

In the report, we review the most prominent views at the end of the Cairo Film Festival.

The dancer appeared, Jawhara, wearing a dress in a mixture of black and gold, the story of which is characterized by a large V-slot from Hind Al-Sadr.

The look was decorated with a long chain and earrings, and she chose to make her look bold, with strong makeup and a loose hairdo, with some tufts falling from it.

The artist, Hoda Al-Etrebi, wore a long red dress, with a one-sleeved story, and a bold leg opening.

And she adopted a soft make-up, and chose the hairstyle that lifted up, and she wore accessories consisting of an earring and a ring.

The actress, Madeleine Tabar, wore a simple satin dress in black and mauve, with the off-shoulder cry.

The artist, Nahla Salama, wore a shiny silver cut dress with a fluffy bottom, and coordinated with her look a silver clutch, adopted soft makeup, and left her hair loose.

The artist, Georgina Tawaf, appeared wearing a two-layer dress with a transparent tulle from the top and bottom with a layer of body-colored satin, and the upper part of the dress came open to resemble a dance suit.

She opted for a lifted hairstyle, while aesthetically speaking, she adopted a strong make-up.

The artist, Maryam Al-Khasht, starred in a fiery red dress, the story of which is characterized by a large V-shaped opening at the chest, with an off-shoulder shout, and a bold leg opening, with a clutch and high-heeled shoes in the same color.

The look was decorated with a long chain and earrings, and she chose to make her look bold with strong makeup, and a loose hairstyle on both sides.

The artist, Arwa Gouda, starred in a long-tailed dress in turquoise, the upper part of which is a shiny crochet top, decorated with a hippie color, which gave the look femininity and attractiveness.

Around her neck, she was keen to wear a golden necklace in line with the colors of the dress, and she chose a classic “bun” hairstyle, and also adopted makeup in neutral colors.

The look was decorated with a long chain and earrings, and she chose to make her look bold with strong makeup, and a raised hairstyle, with some tufts falling from it.

The artist, Abeer Sabri, wore a red dress, with a cape style of velvet, and was distinguished by a bold leg opening.

She adopted a strong make-up, and chose to leave her hair strands loose on both sides.

She wore accessories consisting of an earring, a ring, a bracelet, and a collar.

The artist appeared here, Shiha, in a glossy black and white dress, with sleeves, with a backrest. It came with a strange cry, extending the area above the shoulder to the feet, with an open back.

The look was adorned with luxurious jewelry, including a diamond collar around the neck, and choices of a classic hairstyle, in addition to touches of makeup in neutral colors.

The artist, Zainab Gharib, also starred in a red fluffy dress with a long tail, with a cut-off cut, and an open back, which was equipped with a bow of the same type of fabric as the dress on the back area, and coordinated with it a distinctive square clutch.

She opted for a lifted hairstyle, and wore a strong make-up.

The artist, Amina Khalil, grabbed the attention in a black dress with a cupped style, with a lace of the same color around the neck that gave it a distinctive shape.

She coordinated the look with a thin clutch, as well as silver open shoes.

The hairstyle chose the classic bun, while the aesthetic critic chose to put make-up touches of calm colors.