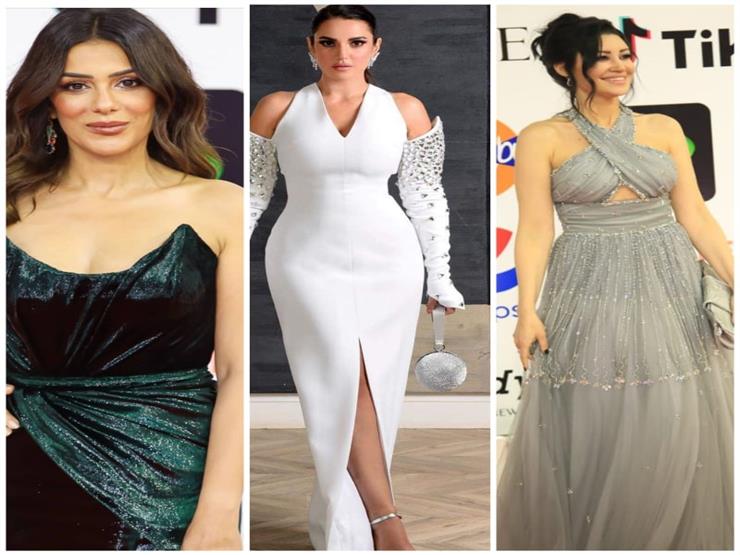 6 stars in short dresses on Red Carpet, the eighth day of the Cairo Festival

The red carpet of the 43rd Cairo International Film Festival is adorned with elegant, varied, and attractive looks, but there are some stars who chose to appear in short dresses.

In the following report, we will show you the most prominent art stars in short dresses during their attendance on the eighth day of the Cairo Festival.

The show dancer, Jawhara, appeared in a light blue dress of “Baby Blue” made of satin fabric, with a short cut in the front to reveal her legs, and long in the back, with long sleeves, coordinated with a silver-colored clutch, and she chose the lifted hairstyle with some tufts falling on the face, She also wore soft-coloured make-up.

The artist, Darine Haddad, starred in a short, shiny silver dress, with a V-shaped opening from the chest, and coordinated with him a long black boot, and chose the loose-haired hairstyle, and adopted strong makeup.

The artist Olfat Omar wore a long black dress, adopted a soft make-up, and chose a hairstyle that fell on her shoulders.

Actress and broadcaster Razan Maghribi appeared in a bold look, as she wore a glossy black stomic top, an asymmetrical pocket decorated with silver kerchiefs, and Razan coordinated with the look open high-heeled shoes, and adopted the wavy hairdo.

The media star, Hala Sarhan, wore a short dress and a petticoat in the same color and woodland, and she also adopted a loose-haired hairstyle.

The artist, Huda Al-Mufti, wore a short leather dress decorated with golden accessories on the middle area, and she wore high lace-up shoes that wrap around the leg, and she chose the soft, flowing hairdo, and also adopted strong makeup.