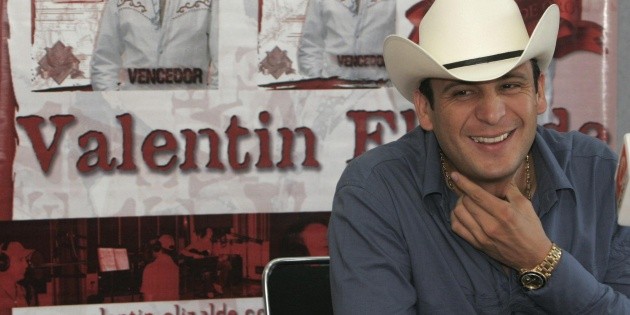 Valentín Elizalde: The singer foresaw his death, according to statements by La Chicuela

Valentín Elizalde could have foreseen his death, comments the television host Blanca Martínez, better known as “La Chicuela” in an interview with El Universal after the singer made him promise to take care of his younger brother.

The presenter was also able to share some moments with “El Gallo de Oro”, but it was during an interview that she did while they were on the way to an amusement park to record some promotional videos, when she commissioned Francisco Elizalde.

“When he passes away I recap like that episode we shared together, because on the way he told me that I took care of his brother a lot and I told him, ‘but he’s your brother, you can support him’ and he replied, ‘no, I want you to promise me that you are going to support my brother‘, then I said yes to count on me. At that time I did not give it much importance, but now that I am already a good friend of his family, they tell me that he foresaw his death, and that is why he made that request, “she recalls.

“La Chicuela” who at that time was the editorial director of the magazine Musical Fury explains that, for the singer Francisco, he was like a son, because he was very young when his father died.

“The one I really saw as my father was Vale and he was always with him. And well, I always take what I commit myself to very seriously, but when you make a promise to someone who is leaving, for me personally it acquires great importance and Francisco will count on me until the last day of my life, “he says.

The golden rooster was a man with a lot of charisma

Share that, the interpreter of songs like “Go with him”, “How it hurts”, “El Sinaloense”, “Go now”, “The most desired”, “And it looks like you”, among others was a man with a lot of charisma, gallantry, super nice, and very simple.

“On that occasion his manager of the record company called me at the airport and told me to go together from the airport to the amusement park so that we could talk and I remember asking him a series of very spicy questions for a program called ‘ The quickie ‘and they were’ sexual ‘questions, and well Most of the men I interviewed got very nervous and this guy didn’t, he turned me around three times and the nervous one was me (laughs) because he answered me clearly, without a filter and I was the one who was red on the road“, share.

She also remembers that women went crazy when they saw him and gave him a very peculiar nickname, “The stallion of the band,” which she took up to call him that way during all her programs, without imagining that the singer himself would complain about it.

“One day he arrived at the offices because we were going to do a cover with him and I remember that his height impressed me many, he was a very tall man and he arrives as a good Northerner and he tells me, “Hey, I’m very angry with you, because I’m not ‘The stallion of the band’ I’m ‘The Golden Rooster'”, then I explained to him why I was saying that and he said, “No, I don’t like being told like that, I respect that my fans do it, but I ask you not to tell me like that”, and I promised that I would never do it again. It was a funny meeting, “he says.

It was in 2006 when Valentín Elizalde was assassinated by an armed group allegedly belonging to the Los Zetas drug gang, after a presentation at the Expo-Feria Reynosa, Tamaulipas.