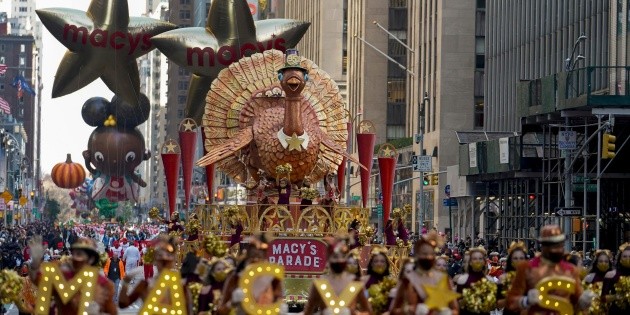 Affected by restrictions due to the COVID-19 pandemic last year, the Macy’s Thanksgiving Day Parade He returned this 2021 in its entirety, although with some precautions.

Balloons, floats, marching bands, clowns, entertainers, and of course Santa Claus they once again walked four kilometers of the streets of Manhattan, instead of being confined to a block, like last year.

Spectators, excluded last year, were back in attendance. High school and college marching bands from across the country returned to the parade. Last year local artists participated to reduce transfers.

The giant balloons, which last year were tied to vehicles, are now being handled again by people on foot who came to the event in disguise.

For President Joe Biden, the parade’s full return was a sign of renewal and he spoke on air with NBC broadcaster Al Roker to say so.

“After two years, we are back. America is back. There is nothing we cannot overcome,” Biden said. by phone from Nantucket, Massachusetts, where he watched the broadcast with his family.

The Thanksgiving Day Parade is the last holiday event in the United States to returns as shots, familiarity, and sheer frustration made officials and some of the public more comfortable with the big meetings amid the ongoing pandemic.

Even so, security measures continued. Parade staff and volunteers had to get vaccinated against COVID-19 and wear masks, although some singers and performers were allowed to remove them. There was no vaccination requirement for spectators, but Macy’s and the city They encouraged wearing face masks. The event also took place despite the fact that days ago a driver hit a Christmas parade in Milwaukee with his vehicle, killing six people and injuring more than 60.

Mayor Bill de Blasio said Wednesday that there was no specific credible threat to the Macy’s parade, but that security measures would be extensive, as usual.

“I am very confident in what the NYPD has prepared to keep everyone safe,” he said.

Thousands of policemen were assigned to the parade route. Cars were closed with sand-filled garbage trucks, other heavy vehicles and concrete barriers.

There were also bomb-sniffing officers and dogs, heavy weapons equipment, chemical and radiation sensors and more than 300 additional cameras along the parade route, said Martine Materasso, chief of counterterrorism for the New York Police Department.