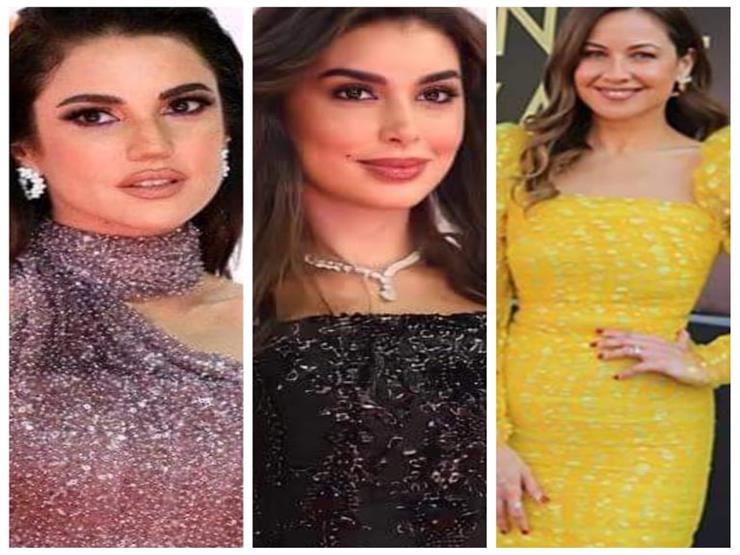 The artist, Arwa Gouda, appeared with a royal look at the opening ceremony, as the dress was distinguished by sophistication and elegance, and it was suitable for her body in terms of neck length, shoulder width and back shape from the back, in addition to the fact that the hairstyle, jewelry and makeup were very appropriate and appropriate.

The artist, Dora, starred in the closing ceremony in a bright mauve dress, and the dress’s story was drawn in a haute couture fashion on the side of the middle, the buttocks and the neck with a leg opening that highlights her slender people in an aesthetic way.

The media, Raya Abi Rashid, also starred on the eighth day, with a look like Disney princesses, as she appeared in a yellow dress of polka-dotted organza, signed by Marmar Halim, and the story of the dress is (pencil dress), in addition to the fact that the story is very suitable for her and highlights her slender body, distinguished by the fact that it is equipped with sleeves Make-up and hair were simple.

The artist, Yasmine Sabry, appeared during the opening ceremony in a black dress. The dress was characterized by a cupped cut, decorated with embroideries at the chest, and inscriptions from the bottom. Her makeup was strong, as well as she decorated her look with accessories consisting of a ring, a bracelet and a collet, and left her hair hanging down.

At the closing ceremony, the artist, Youssra El-Lozy, wore a white dress, with transparent sleeves, and a multi-role from the bottom. She adopted strong make-up and a classic hairstyle, as well as decorating her look with simple accessories consisting of an earring, a ring, and a silver-colored clutch.

At the opening, the artist, Sarah Al-Tunisi, chose a long dress, embossed in black and studded with golden stripes, with a bold chest cut, with an open back, and adopted a lifted hairstyle with falling tufts, and soft makeup, and coordinated with the look, accessories with a soft design.