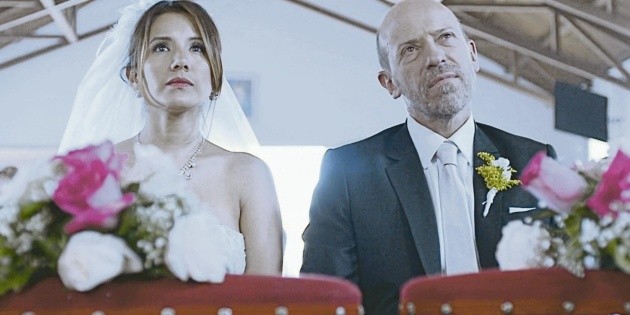 The series “When you live with me” comes to VIX

It is now available on the free streaming platform, VIX, the Colombian series “When you live with me”, which is a free adaptation of the novel “The discrete hero”, work of the 2010 Nobel Prize in Literature, the Peruvian, Mario Vargas Llosa.

This 2016 project is a Caracol Televisión production, starring Caterin Escobar, Diego Trujillo, Sandra Reyes and Christian Tappan. Regarding the revival for the public in Mexico and Latin America, the actor Diego Trujillo speaks in an interview for this publishing house.

“I love knowing that these Colombian productions are transcending borders and that they are reaching Mexico, for me it is a pride,” confesses the actor. The series tells the story of “Gertrudis” (Sandra) and “Armida” (Caterin): two young sisters with opposite personalities. “Gertrudis” is submissive, withdrawn, insecure and shy. “Armida” is rebellious, outgoing, self-confident, impulsive and the owner of great beauty. They are two sides of the same coin.

“I am lucky to meet Ana María Parra, who was in charge of the adaptation of the novel and I respect her very much, she is excellent at writing. When I found out about the project and found out that it was based on a novel by Vargas Llosa, the emotion was great. Later, when I met the cast and directors, everything seemed charming to me, because for a long time I have paid a lot of attention to the projects that I do, they have to excite me and like them, and this was the case ”.

The series has 72 episodes, each one shows the daily life of many Latin Americans who have been forced to leave the customs of their province to seek a better future in the city. “The fact that the story was based on a novel by Vargas Llosa was already an immense attraction, because that guarantees that the essence of the plot and its structure have a very important weight and interest, but also, the story in particular of my character, it caught my attention because it suddenly disappears ”.

In the plot, Diego plays “Ismael Herrera”, owner of an insurance company. He is a top executive, very intelligent who knows what success is, he has a black humor that many confuse with cruelty. She has won in everything, except in educating her two children, “Magdalena” and “Escobita” well; the former could never find a place in the world and the latter is an ace for illegal businesses.

“I liked developing a character who is a good person and who leaves a series of lessons during his short time of participation, but disappears, I found that fascinating. The novel is full of a number of elements that are very recognizable in all this Latin American dramaturgy of soap operas ”. Diego acknowledges that melodramas in Colombia, above all, have had a great evolution in the way of telling their stories.

Diego is now getting ready to develop a special participation in an Amazon series and as of January he is likely to be in a Netflix production.