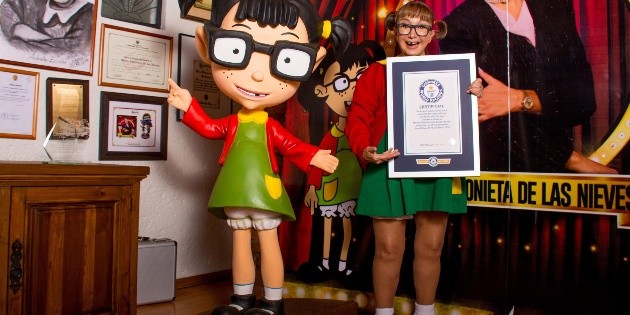 Indeed, María Antonieta de las Nieves received her Guinness Record certificate for the 48 years and 261 days that she has continuously interpreted “La Chilindrina”, the character created by Roberto Gómez Bolaños for the program “El Chavo del 8”.

However, regarding child characters, “Chabelo” is undoubtedly older, so much so that his date of birth is difficult to pin down: By 1953, “Chabelo” was already appearing in soft drink commercials with Tío Gamboín, making it a character that Xavier López gave life to for at least 62 years.

That does not mean that the record of “La Chilindrina” is wrong but, as the fashionable phrase says: “It is not false, but it is exaggerated.”

Its Guinness certificate specifies that the record is awarded to Marie Antoinette de las Nieves as “the actress who has played a child character the longest.” I mean, it’s a record for women.

It must also be remembered that Guinness does not seek or assign records, but receives requests from people who want to become a record.

“Cepillín”, meanwhile, he accumulated a career of 50 years (he is also a little longer than “La Chilindrina”), but he never set a Guinness record.

In the case of “Quico”, his career had the same rhythm as that of “La Chilindrina” since they are characters that emerged from the same program, but Carlos Villagrán’s last project with his character as a spoiled child was “El Circo de Quico” , whose last tour happened in 2018 and was later affected by the COVID pandemic.

Instead, and that favors the record of Marie Antoinette de las Nieves, “La Chilindrina” remains active: Two months ago, he published “Let’s Play”, a country music song and video project, in addition to doing the farewell tour with shows in the United States.