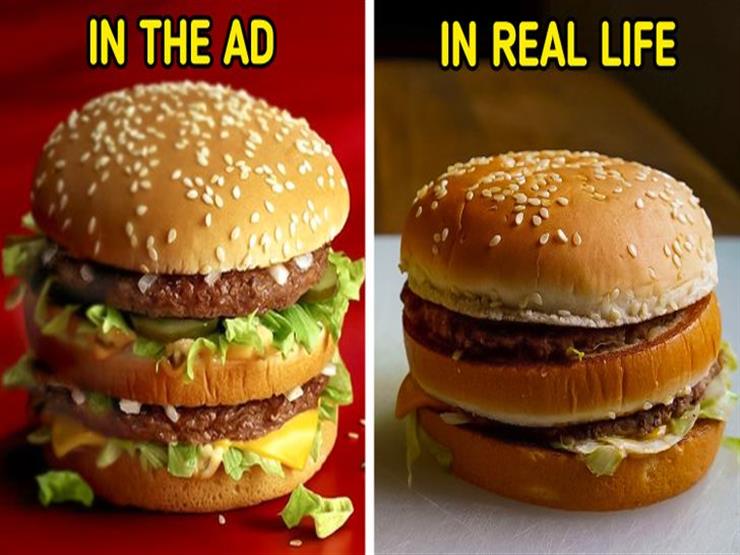 As soon as we see food and drink ads on TV, a question comes to our mind, what is the secret behind the wonderful and delicious look of these foods.

There are many tricks that advertisers resort to to show us the colors of food and drink in commercial ads in the best way, which we review for you, according to what the “Bright Sight” website explained.

1. Filling the burger with sponges and toothpicks:

To make it look good, one of the techniques used is melting the cheese with something that gives it heat, like a hair dryer. They put a sponge on the burger to give it more length and use toothpicks to hold the ingredients in place. The final touch is oil, to create the illusion that the meat is cooked and fresh.

Ice cream can be one of the most stressful foods during a shoot, as it breaks up before you find the perfect shot, but to avoid melting, professional photographers have found a way to deal with it around the clock, and the ice cream is replaced with mashed potatoes mixed with hair conditioner and color, giving it a closer look be reality.

3. The smoke you see from hot food is caused by a tampon placed in the microwave.

One of the most common methods used to give us the impression that food is fresh, is to heat a tampon in the microwave and place it behind the food, to see the smoke rise.

The ice in the drinks melts within minutes, so it is recommended to use fake ice cubes to avoid this problem.

5. The color of the chicken turns golden brown thanks to the detergent:

Oven-cooked chicken always looks tempting and commercial images make sure to note that, advertisers dry the raw food with tissues, removing any liquid the skin may contain so that a crunchy effect can be achieved later, then stuff them with napkins to give them more volume and make them not look skinny, and seal them up With needles, attach the wings to the body and legs together, and then put it in the oven until it turns brown, and mix the detergent with the dye to get a shiny golden color.

6. Sprinkle the fruit with water and glycerin to make it look fresh.

The fresher the fruit, the healthier and more appetizing it is. To achieve this, photographers often mix 50% water and 50% glycerin in a spray bottle, and spray the solution on the fruits before photographing them. The goal of using glycerin is to prevent the droplets from evaporating quickly, Rather, it remains as it is until it is washed.

Although commercial images of milk containers full of cereal and fruit are attractive, in reality you would never want to eat any of them, even if they were given to you for free.

One of the photographers revealed the most used trick in photographing this type of food, which is first to make a simple dough of flour and water as a base to fill the bowl, and then, white glue is added to it instead of milk, so that the grains do not sink and sag and stick to each other, and this gives The photographer takes longer to catch the perfect shot.