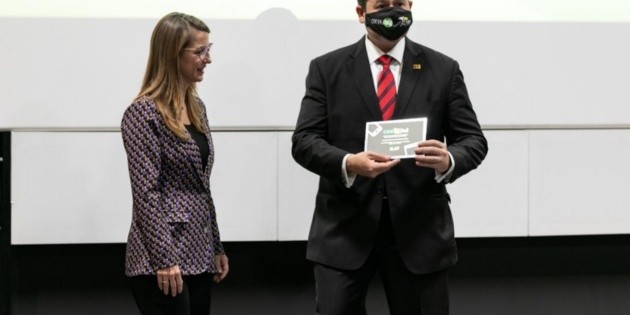 “TVMorfosis, the shock of the present” receives the Ibero-American Audiovisual Award

The television series “TVMorfosis, el Shock del presente” produced by Channel 44 of the University of Guadalajara, won the award for the Best Social Impact Program within the first Ibero-American Audiovisual Contest of Cultural and Scientific Dissemination (Cre @ tei), sponsored by the Ibero-American Educational and Cultural Television Association, ATEI.

The contest was organized by the Audiovisual Workshop of the University of Valencia and the Generalitat Valenciana and had its first headquarters in Valencia, Spain, where the awards were presented in the nine categories convened.

In this first edition, 200 works were received, of which 26 went to the final stagel that was sanctioned by an international jury made up of seven prestigious Ibero-American audiovisual professionals.

“TVMorfosis, the shock of the present”, was a series produced at the height of the COVID-19 pandemic, in which prominent communicators and specialists in the field of information technologies, reviewed the phenomenon of infodemic in critical moments of health for humanity.

Other works awarded in this first edition of Cre @ tei, were for the best musical program, Acústico, from Jalisco TV, Mexico. The winner of the Best Short Story for Social Networks was COnVIDados, from Canal Teleantioquia, Colombia. The producer Tracy Mena received the award, on behalf of the National Distance State University of Costa Rica, for the Best Scientific-cultural Report, for Pollination, Life Cycle and the program NotiON, of Canal Once , Mexico.

In the category of Best Social Impact Program, the jury decided to award a special mention to La Era de Sembrar, from the State Distance University of Costa Rica. The winner of the Best Educational Program went to Argentina with Ciencia a la Carta II, from the TECtv channel, and the Xafant terra series from TAU-Universitat de València, Spain, was the winner for the Best Documentary Series. Where it stands out with a Special Mention to the Days of News program, second season, of Canal Zoom and the Colombian Film Heritage Foundation. On this occasion, the category Best Piece of Cultural Scientific Audio was declared void.

At the gala awards for Best Documentary Feature Film, the winner was Espero Tu (Re) Vuelta from TVa2 Produções, Brazil. Given the creativity of the projects presented, the film The Great Trip to the Small Country, by Micaela Solé from Uruguay, also received a Special Mention.

The award ceremony took place at the headquarters of La Filmoteca Valenciana, in Valencia, Spain, on November 8.

The winners received the possibility of expanding collaboration and dissemination channels for their audiovisual products, as well as an economic incentive of around 1,200 dollars.