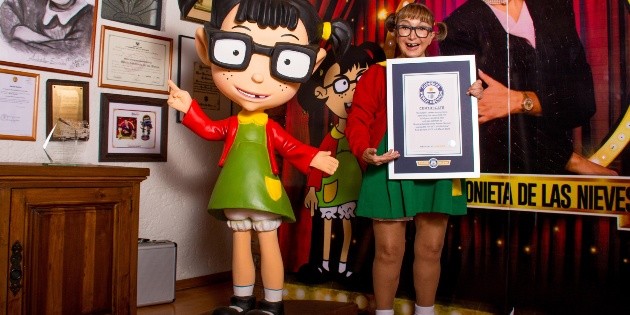 The actress Marie Antoinette de las Nieves got the Guinness record for the longevity of its child character La Chilindrina, played for 48 years and famous in “El Chavo del 8”.

“I am proud of this award, it is a great recognition that I never thought they would give me. These years have been wonderful, having traveled the world with this character is something unique,” said the 70-year-old Mexican actress.

De las Nieves received Guinness recognition for her career as the actress with the longest professional career playing the same child character that she embodied during 48 years, 261 days.

“La Chilindrina is a very recognized character in various Latin American countries and the world. The experience and extensive trajectory is unquestionable since, for decades, generations after generations grew and enjoyed her character,” said Carlos Tapia, adjudicator of the Guinness World Records.

I am proud of this award, it is a great recognition that I never thought they would give me

With black patent leather shoes, short dress, glasses, two tails and without a tooth, the naughty girl of eternal 8 years marked an era in “El Chavo del 8” with his games, adventures, occurrences and good dialogues with his father Don Ramón, and the inhabitants of the neighborhood owned by Señor Barriga, in the Mexican children’s series, also popular in many countries.

“With great honor, Guinness World Records certifies María Antonieta de las Nieves ‘La Chilindrina’ with the title of record for the longest professional career of an actress playing the same child character,” said Tapia, who surprised María Antonieta with her certificate of the record.

As a child, the actress dreamed of winning a dance contest, but fate took her the other way; She participated as a dramatic actress in theater at the Palacio de Bellas Artes and at the age of seven she made her debut in the film “Thumbelina”.

He joined Televisa to do dubbing of movies and series American and later appeared in soap operas.

In 1971 she made her debut in “El Chavo del 8” as La Chilindrina, a character that she created three years before starting in the series.

The actress also made theater, cinema, soap operas and was the only one of the group “El Chavo del 8” who had her own series on Televisa “Here is the Chilindrina” and she was also the only one who made her own movie, called “La Chilindrina in a hurry”.

For more than 30 years, De las Nieves has toured Mexico, the United States, Central and South America with his show “El circo de la Chilindrina”; They have paid tributes to her and she has received awards as the best children’s comedian in all of Latin America.

His funny character has recorded 17 discos since 1975.