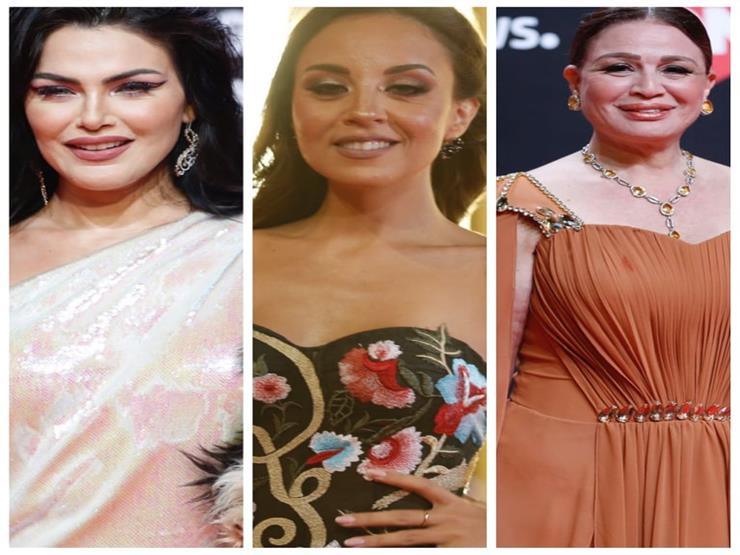 I wrote – Shaima Morsi
Photography – Alaa Ahmed
The stars shone on the red carpet on the seventh day of the El Gouna Film Festival in its fifth session, with looks that caught the eye and became the talk of the pioneers of social networking sites.
Here, we present to you the following report, the views of the seventh day, which were characterized by diversity, elegance, attractiveness, and even excitement and strangeness.

The artist, Basma, wore a long, multi-colored dress, exposed at the chest area, and adopted a soft make-up.

The artist, Maryam Al-Khasht, appeared in a fluffy cup dress with a jeep, decorated with flowers around the chest and waist area, and wore high heels in the same color as the dress, and chose the hairstyle that fell on the shoulders.

The media, Raya Abi Rashid, wore a long red dress with transparent sleeves, decorated with embroideries completely, and from an aesthetic point of view, she adopted a strong make-up, and left her curly hair loose, and coordinated with her look black shoes.

The media also wore a black jumpsuit, Bossi Shalaby, with a cup-style and a bright fuchsia extension dangling into a long tail in the same color.

The artist, Abeer Sabri, appeared in a bright orange dress with golden threads, with a “One Shoulder” cry and a long side leg opening, with a thin belt at the waist and a flower decorated on one of the shoulders.

The artist, Ilham Shaheen, starred in a dark camel color cut dress, whose story was distinguished by ruffles from the chest, with buffy sleeves and with backstitching at the hand, and coordinated with it a clutch in golden color. Her hairstyle was unusually raised.

The artist, Rana Rais, wore a long dress in a light pink color, with a mermaid story, with cornices and a V-slit from the chest.
Aesthetically, she chose long chain accessories, she wore a strong make-up, and her hairstyle fell on the sides of her shoulders.

The artist, Dareen Haddad, also appeared in a short dress in golden color, and coordinated with it shoes in the same color, and adopted a soft make-up, and left her curly hair loose.